Sooo.... I thought, since we live in a different country now, I would post once a week about new words we have learned.  (Good thing I didn't do it last week, cause I was told I had been teaching my kids the wrong word for hello)!  :D

Hello-  yo-bu-say-oh
Goodbye-  annyonghi kaseyo (ahn yong ee kay say oh)
Thank you- gamseh hamnida  (gom sahm needa- they say it really fast, so it sounds different than it looks).
I'm sorry- mean hamnida (mee ahn am needa)
How are you- onaseyo (oh nah say oh) (this is what I thought hello was, but was informed by a taxi driver that it was wrong- which is cool, since my kids were speaking Korean to him-and he understood them)!  :)

Funny story to go with the I'm sorry part-  We walked from the iPark Mall to Yongsan Garrison two weekends ago, and coming through the gate on foot, we stopped to show our IDs.  Well, Tabatha's husband was talking to us, and we started walking forwards.  He followed, and the next thing I know, I hear him laugh and say, Mean hamnida, mean hamnida!  The guard had come running out of the guard shack and chased after him a few feet, because he had forgotten to show ID!  :O   The guard seemed to think it was cool that he was trying to speak Korean, and said it was alright, though, so no harm, no foul.

Anyhow, I'm off to go make a grocery list- its hot as blazes outside and humid, to boot, but Jon said he'd watch the kids!  SCORE!  :P  No hauling a carseat into the commissary, woohoo!

Will be back in a day or so with an update on what we've been doing, and hopefully, pictures. 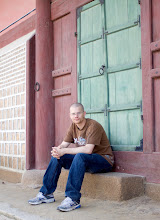